Just how fast can a year go by? Pretty fast it would seem as it was just yesterday (I thought) that our 3rd grandchild, Lleyton, was born! And now today is his FIRST BIRTHDAY! We'll be celebrating with him and his mama, daddy and sister Kennedy this coming Saturday. But for now, Papa and I want to send BIG birthday hugs and kisses to our boy on his big day!

I'm sure most of you have been reading about the problems associated with plastics containing BPA (no, it's NOT BP America although I do wonder if they produce some in their chemical and plastics divisions...) - it's bisphenol A and there is some compelling evidence that it is directly responsible for the early onset of puberty in American youth as well as a host of other issues with adults (breast cancer, prostate issues, fertility problems, obesity and diabetes to name but a few). I don't know about you, but I've been "plastic dependent" for years and years. Who hasn't had a pantry full of sippy cups and plastic baby bottles at one time? And who hasn't, at one time or the other, heated food or liquids in the microwave in plastic containers? This issue isn't an "instant reaction" issue as much as a long term issue - gradual exposure over a period of time.

I've found this link to a site that gives reports on different manufacturers that are considered good, fair, poor, etc. in their use or non-use of BPA in their products. And AOL had an article today about it. I was amazed at how many products I not only have in my house but have purchased for my grandchildren that have a lot of BPA in them! It was in ignorance but still, I want to flag this problem for you all so you can do your own research and make your own assessment of the situation. The evidence is compelling enough for me to not want to take a chance - I've decided to be pro-active on this issue.

Before everyone gets in a panic and throws out half the house, I do hasten to add that the little recycle symbol on the bottom is a good indicator - if it's a 7, toss immediately. It's the worse one of all! But for the others, check the website, make sure liquids are not stored for long periods of time, don't microwave or leave in a car where it will get hot (this hastens release of BPA into the liquid or food item) and use common sense - you wouldn't drink water out of a plastic cup that had been sitting for a day or two - why would you do the same to your child? 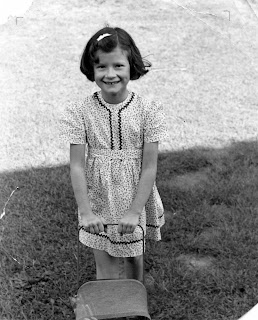 Today is my mother's birthday, Mom to my sister Kati and I, the kids' Grandma Crawford, the grandkids' GG Ann and our dad's Annie. Born in Missouri "lo, those many years past" and transplanted to Texas in 1958, she's a Southern Lady with northern roots (but we don't hold THAT against her!)

I think sometimes that when she moved to Lubbock back in 1958 that had to be a harder transition than when we moved to London back in 1982. Phone calls were prohibitively expensive, air travel was only for business and the wealthy, Lubbock was flat, high and dry while Missouri was hilly, humid and full of lovely vegetation. The beef was grain fed - she was used to corn fed. And there were no blogs to "connect" like we have now. A pioneer woman if ever there was one!

So happy birthday Mom. You've had the courage to transplant again to the Houston area - hilly a bit, VERY humid and full of vegetation. Think of it as a 'faux Missouri'. And bloom where you're planted once again.
Posted by Cheri (aka "The Mom Lady") at 4/15/2008 10:20:00 AM No comments:

Update on Jordan and Jaxon...

I talked to Grandma Felicia this morning and Jordan and Jaxon are doing well. They have a long road ahead of them being 26-weekers, but also being African-American males, they are at the "top of the class" for preemie hardiness. :) (Jen had told me about those "wimpy white boys"...) Crichelle is doing well and all attention is on the boys and how they are doing. So far, so good! Please continue your prayers! :)
Posted by Cheri (aka "The Mom Lady") at 4/10/2008 11:10:00 AM 2 comments:

Our friends and brethren, Crichelle and Jyusef, had their twin boys today at approximately 25 weeks. I haven't heard anything else other than that they've been born...early...very early....

I saw this on someone's blog today and have to share it! If you've ever sung this version, you'll be amazed at how this (seemingly 2 year old) little girl has the timing, cadence and movement of the song down pat! Thoroughly charming!
Posted by Cheri (aka "The Mom Lady") at 4/09/2008 08:49:00 PM No comments:

Those of you who read my blog know how much my husband travels. He has more miles on him that a '55 Chevy although he runs (and LOOKS!) much better in my opinion. But the long and short of it is travel is tiring. The allure of international travel, even at the Business and First Class level, has lost it's luster in the never ending rounds of flights, schedules, lounge waits, security checks, cancellations, weather problems, etc. Some airlines handle this better than others. Some airlines are just a joke. And some have the most interesting names.

He travels to Kazakhstan more than just about anywhere else. In going through the piles of paper on his desk today, he found some of his ticket receipts. He thought I would find this particular one interesting. He is right - what a name for an airline. I wonder why they've never made it "big" in the USA?
Posted by Cheri (aka "The Mom Lady") at 4/05/2008 11:55:00 AM No comments:

I have been hacking again this week. NO! Not the internet - my lungs up!! Sickness, as previously mentioned, has bestowed her less than good fortune upon my person this week past so I have lived a very sheltered life (that means I've stayed in all week - out of the heat, the humidity, the wind).

Imagine my surprise when I let the dogs out mid-afternoon for a little "wee-willie-winkie" and a rush of cool air blows in! Hmmm, am I having chills? I check the outdoor thermometer to find it is indeed 59 degrees F in south Texas, in the spring. Will wonders ever cease.

What NOT to watch!

Well, after months of wanting to see the movie "Atonement" and actually BUYING the DVD at Target the week it was released, Mike and I finally had time to sit down and watch it last night. WHAT A DOWNER!!! While the film may be beautifully shot, the score hauntingly lovely, the actors first rate, the story is DISMAL, DEPRESSING and there is NOT a happy ending at all! If you are the type that loves the angst of life type movies and are unconcerned about a happy ending, have at it. Otherwise, don't waste your time or your money.

And it was a bit uncomfortable to watch at times due to the content of the film. I was in the privacy of my own home, with my husband, and was STILL embarrassed by some of the scenes in the film. It was just plain awkward at times.

Thank you everyone for your prayers. Crichelle is in the Womens' Hospital in Houston and will be on bed rest/observation for the rest of her pregnancy - which now looks longer than we had earlier thought! Both babies are doing well, they are still in utero, she is being monitored and hopefully get a few more days if not weeks before the little guys are born. One amniotic sac has broken and the other one is intact. But as I said, she is being carefully monitored, constant heart rate checks on the babies, etc. So - so far, so good!

A dear childhood friend of Tim's, whose mother and I have been friends since 1991, is in urgent need of prayers. Crichelle has had a hard time conceiving. Last year she lost their first baby about 3 months before her due date. Now she is pregnant with twins, in week 26, and her waters broke this afternoon. So please pray for Crichelle, pray for her baby boys, pray for her husband, Jyusef, pray for their entire family and extended families, pray for the doctors and medical professionals caring for them all, pray that they will have strength and hope regardless of the outcome and that in all things God's will be done.

I've been there, done that, with twins born at 27 weeks. We were blessed with one, one went to live in heaven. I know, I think, how they might be feeling.