School days...Public School Days that is...

Mirai is officially in Kindergarten. "Real school" as some refer to it although I'd challange someone to the death if they said that to me last year when Mirai was in Miss Boo's pre-k at Yellow Brick Road. If that wasn't "real school",  I don't know what is. Last year's pre-k is what has made this year's transition to kindergarten seamless. And I do mean SEAMLESS. I was the one intimidated by all the 'process' of public education - the enrollment, where to go for leaving off and picking up, orientations (and the lack of obvious notification thereby missing most of it), school handbooks and the (now I know annual) mountain of papers that come home that first week spelling out the consequences for non-compliance to a myriad of rules put in place, I'm sure, by past lawsuits and enforced by the Law of the Land. Yes, heady stuff indeed. 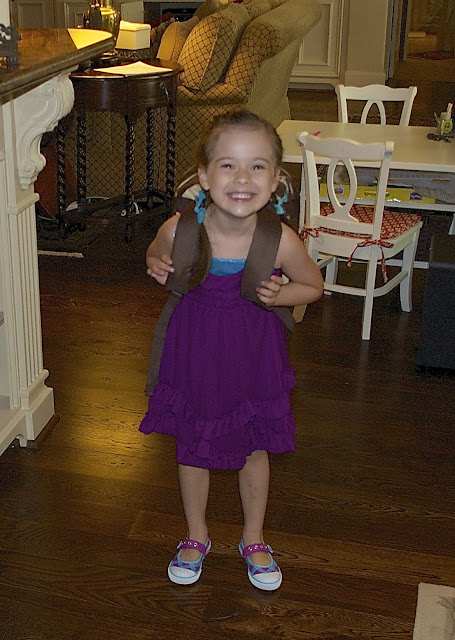 You see, my "original three" went to school overseas in private International schools. They were more of community than an Institution. And America was still considered a "Christian Nation" so there was more conservatism than not. The schools in which our children were enrolled did not "teach to the test" to obtain federal money. We were indeed fortunate that Amoco paid the fees for these private schools overseas which gave our children a solid educational foundation and a sense of the aforementioned community. But I digress. This is about Mirai and Kindergartin. 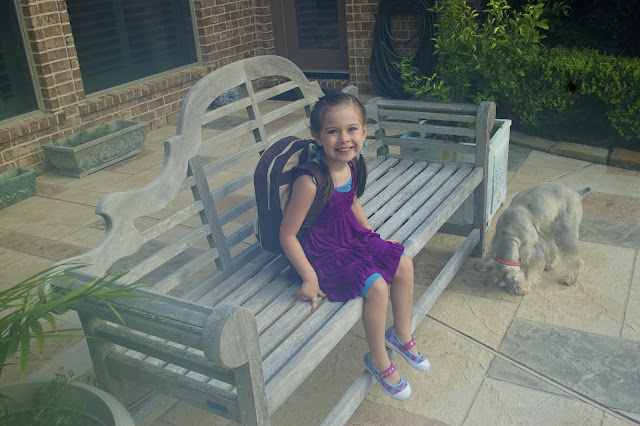 Her first day of school was flawless. I had bought a 'time timer' that helped her with time management. And I highly recommend these! I put 10 minutes on and placed the clock where she could see it. 10 minutes to go to the bathroom and brush her teeth. She needs this because, otherwise, she'll come downstairs and curl up in a fetal position at the foot of the stairs and just go back to sleep.

Then I'd set 10 more minutes to get dressed and come in to do hair. Then 10 more minutes for breakfast. Worked. like. a. charm...
There is homework every day which is a new concept for me. "Back in my day", kindergarten was a vehicle by which children learned three things basically:
1) Wait in line
2) Don't eat your crayons
3) Spell your name
Today's Modern Kindergartener must know their alphabet before the first day of class and, hopefully, all their numbers. They must already be independent. In other words, today's kindergartener is my 2nd grade. AND they (both the school and a lot of parents) are already wanting to identify "gifted" students and put them in special programs. I'll hasten to add right now that I'm not against challenging kids to do the best they can and continue to reach. But these are FIVE YEAR OLDS. I'm foreseeing burnout by 8th grade at this rate. Since when did being competitive in the world have to start at five years old? And I know a lot of "successful" folks that had a great childhood, unfettered by a push to excel that started in kindergarten. Okay, I'll get off my soapbox...for now. 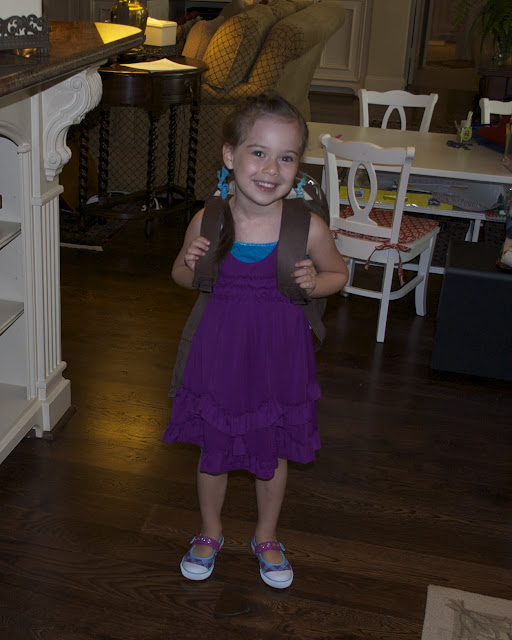 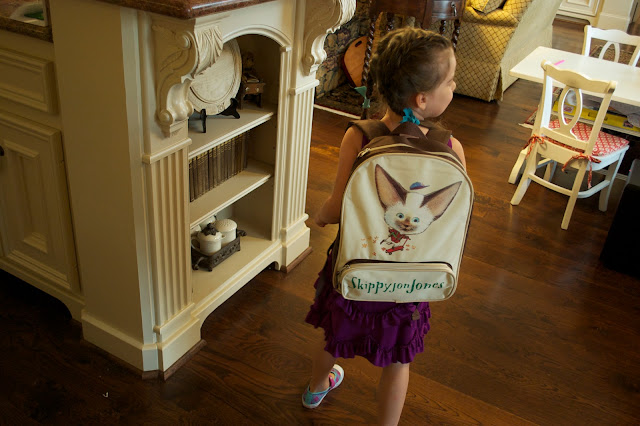 For her birthday, she'd received a Skippyjon Jones backpack and that one is her favorite. As long as they don't throw Physics textbooks into the mix this year, I think Skippyjon will do just fine, thank you very much.

Day One she marched into that classroom and never looked back. I did not go in with her past the door to her room, and Day Two I just dropped her off near the door to the Kindergarten wing. When school is over, she comes bounding out full of information about what happened that day. I asked her what her favorite thing was - "Snack time". Of course. There's plenty of time to let her know later that one cannot get a degree in Snack Time (although going to a Culinary Institute would be close I guess...) The first week she got to be the "go bag"  person which took me a while to figure out - she kept telling me, "I carry the black bag everywhere we go". Okay. And what's IN this black bag? "I don't know - paper and books?" Ms. Fyke confirmed that when they go from class to class, there is a bag that carries all the papers and things they'll be working on and a student is selected each week I'm assuming to carry out the courier services. Mirai was honored.

With Mirai being one of the youngest (if not youngest) in her class, with a July birthday, I had some reservations about her readiness to be in kindergarten but those doubts have been laid aside as I see her blossom and grow in her new environment. And, having done this before, I know to sit back and enjoy the ride because it won't be long before she's in less innocent environs. Vive kindergarten!
Posted by Cheri (aka "The Mom Lady") at 9/13/2012 09:35:00 AM